Although man has proclaimed himself the crown of creation and the ruler of all animals, this triumph would hardly be possible without the help of friends and subordinates – animals. The Mongol tribes formed the largest empire in the history of the world on horseback, while the dog Laika was the first living creature from planet Earth to travel into the space, but many of the discoveries of modern science lie on the shoulders of mice and rats. Monuments have been erected in many cities around the world, highlighting and appreciating the contribution of animals (although not always voluntarily), and the Preili Museum of History and Applied Arts also bear witness to the achievements of the human-animal union.

The collection of Preili Museum includes musical instruments or whistles (svilpaunieki) – clay toys – of several Latgalian potters – Antons Ušpelis, Andrejs Paulāns, Polikarps Čerņavskis, Bronislava Kikere.  Svilpaunieks is a clay figure with a hollow center, with 1 or 2 sound holes and a blown gap with a whistle hole. These whistles come in a wide variety of forms, inspired by the animal world and most commonly by birds and horses. But there is a place for a cow, a sheep, a goat, a pig, a dog and a cat. In terms of form, they stand far from naturalism. Silpavnieki also decorates dishes – for example, beer mugs with whistles are used to let the hostess know that the dish is empty by whistling. Andrejs Paulāns is considered to be the one of the most outstanding master of svilpaunieki. Among the Paulāns svilpaunieki, a place of honour is given to the horse, but there are riders on the ox, the miracle bird, also on the pig. There are saddled horses, sheep, deer. Often these whistles are designed as animals with several heads. Today, svilpaunieki have lost their toy function and are more often traded and bought as souvenirs. 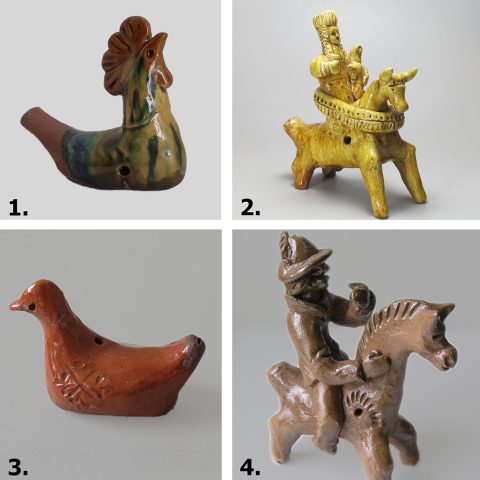 A handbook for requisitioning horses suitable for military service. 1906

Historically, only a few richest countries in the world had “state owned horses”, ie state-maintained stables where horses were bred for important national functions. In turn, peasants’ horses were used to perform the tasks necessary for the army, and, like humans, horses were subjected to military service. The handbook was issued by the General Staff of the Russian Imperial Army and refers to the Tsar’s 1876 Law on “Horse Military Enlistment”. According to it, the military personnel of the Russian Empire had the right to requisite up to 40% of the horses owned by manors or farms in the territory of the whole country for the needs of army functions. This duty was also performed by Ignātijs Kubeckis, a clerk of the manor of Geraņimova (now Preiļi municipality) who served in the Don Cossack Regiment.

The expropriated horses were responsible for performing physically heavy work – transporting the army and its parts, towing ammunition and artillery, as well as service in the cavalry. The responsible persons of the army needed certain skills to select horses strong enough and useful for work, their usefulness being determined by the physical parameters of the horse, such as the condition of nails, teeth and muscles. 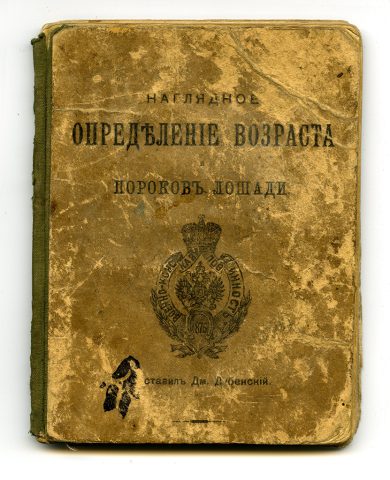 Photograph. Lucija Preise and her cow Margo in Siberia. 1950’s.

The living conditions that awaited the Latvians deported on March 25, 1949 were very difficult, and in the story of every Latvian who survived Siberia there are memories of great deprivation, the feeling of hunger, the hard work and at some point, it seems, even the help of fate itself, which allowed survive this time.

Lūcija Preise, who was deported with her children, worked as a milkmaid in a collective farm in the village of Umļekan, Zeja district, Amur region. She had to get to work well before sunrise, sometimes measuring several kilometers on foot to milk, feed or transport cattle from pastures to the farm and vice versa. Although the work was very hard, L. Preise treated her cows with great love, as she had used to do in her household in Latvia, Madona county, Andrēni.

In Siberia she cherished especially her cow Margo, who was not only very calm, but also, as L. Preise remembers, very smart, because she knew her milking time, knew the way home from pasture, even knew how to open the fence. With her hard work and persistent work L. Preise was able not only to overcome the burden of Siberian life and return to Latvia, but also to fulfil the greatest task of her life – to educate her children. 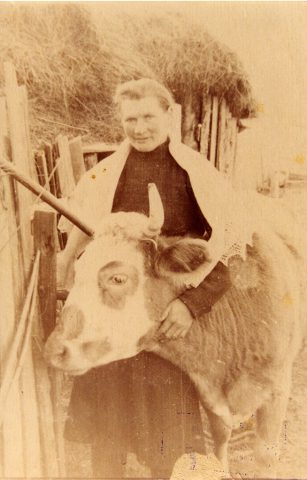 Since ancient times, animals have been both rivals and companions of man. Man has always felt the intimate relation to animal world. This feeling could not but found expression in a variety of activities, both related to everyday economic needs and religious ideas and art.

The first images of animals found on the territory of Belarus date back to the Neolithic period. They are small figurines of wild animals and birds that are believed to have a magical function and were used in hunting rituals. With the transition to agriculture and cattle breeding, images of horses became increasingly common, which also acquired a sacred meaning. The horse began to associate with the sun, and a bird that rises into the sky and brings the sun’s warmth on its wings became a symbol of domestic happiness and well-being.

The image of a bird is one of the most spiritual folk images. It was a symbol of warmth and light, the connection between earth and sky, between the world of the living and the dead. The art of making birds from wood has been developing over the centuries, but has been practically lost. Its revival is associated with the name of the folk master Mikhail Rzheutsky (born 1947), who began his creative activity in the 1970s. Birds have become a favorite subject of the master, who works not only with wood, but also with clay and glass. Mikhail Rzheutsky became a laureate of many international competitions. He is the author of the book “Belarusian clay toy”, in which he summarized his creative experience. 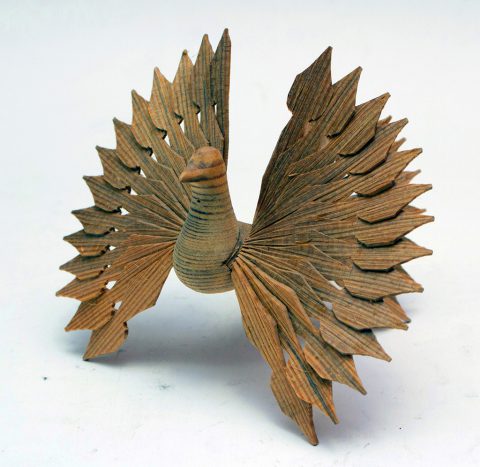 The horse is apparently a later image than the bird. Sometimes it was also endowed with the function of a delegate between the worlds. It is not surprising that during the excavations of some ancient settlements on the territory of Belarus, the images that combine the features of a bird and a horse are found. In the East Slavic tradition, the horse was also an attribute of Yarilo who was the deity of spring and fertility. According to popular beliefs, spring began from the moment when Yarilo descended from heaven to earth on a white horse. After the adoption of Christianity and the identification of Yarilo with St. George, who was also depicted riding a white horse, the commemoration day of this saint, May 6, began to be considered the beginning of spring.

Rye ears were another attribute of Yarilo. There is an assumption that the first art products made of rye straw could have been dedicated to Yarilo. Such artifacts are very common in Belarus. One of the most famous straw craftsmen is Natalya Rzhevutskaya, the wife of Mikhail Rzheutsky. Their workshop located in the village of Nemanitsa, Borisov district, produced hundreds of works in a variety of techniques, which testify to the fact that ancient folk art has not been forgotten. 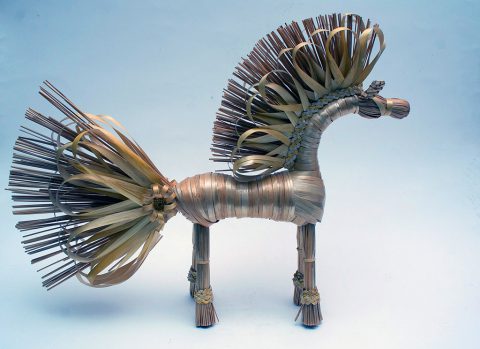 Sharkhuny (sleigh-bells) is a set of bronze or copper hollow balls with grist inside, fixed on a leather belt. They appeared in ancient China and had many functions. In Belarus, as in other countries of the region, they were most often used as an element of horse harness.

The collar, on which the balls were attached, was tied to the bridle with straps. Usually there were seven, nine or eleven balls. The balls had different thicknesses of the metal from which they were made. Therefore, they emitted sounds of different tones. The distribution of sharkhuny was connected with the peculiarities of the sound. They replaced more sonorous bells, which in the 19th century were allowed to be used only by couriers. In addition to the obvious practical usage, for example, the sharkhuny were attached to the last sleighs of the winter carts and helped to understand whether they were not lagging behind. Also the sharkhuny had an important ritual significance. Decorated with flowers and ribbons, these items were an important element of the wedding cortege. It was believed that their sound freed from evil spells, cleared the way for a young family from dark forces that could interfere with their happiness. 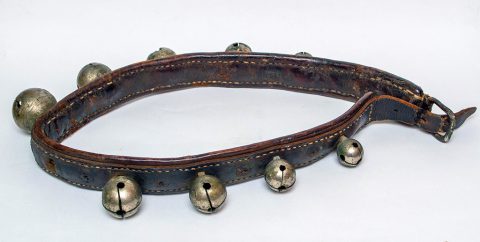 The Panevėžys Local Lore Museum boasts a collection of world insects amassed by Valerijonas Straševičius. It consists of more than 5 thousand butterflies and insects from all around the world, and contains a large number of exotic, rare, protected, and extinct insect species from Europe, Africa, Asia, America, and Oceania.

Straševičius began to build his collection in 1915, but some insects that he acquired are dated as early as 1870. He acquired the most interesting insects and atlases in cooperation with the world’s insect trade companies. Straševičius systemized and drew the exhibits of his collection, and himself collected insects of Central Europe.

In the summer of 1940, the Naujadvaris estate was nationalized, the Straševičius family was evicted, and on 14 June 1941, deported to Siberia.

The collection of more than 6 thousand exhibits that Straševičius accumulated before his deportation, in 1942 was transferred to the Panevėžys Local Lore Museum thanks to the efforts of the naturalist Jurgis Elisonas and the then-head of the museum Dominykas Urbas.

Valerijonas Straševičius was born on June 20, 1885 in the Augustavas manor, near the village of Upytė, Panevėžys District. The naturalist-to-be was raised in Riga. In 1905, he finished the Emperor Nicholas I Gymnasium in Riga, and later studied in Czechia, Belgium, and from the autumn of 1910, at the Faculty of Natural Sciences and Chemistry of the University of Cracow. In 1919, Straševičius was invited to work as a teacher at the newly established Panevėžys Polish Gymnasium. There, he taught chemistry, physics, astronomy, botany, zoology, and calligraphy until 1933. Having survived deportation, Straševičius with his wife received permission to travel to Poland to live with their son, and that is where he died after a traffic accident. 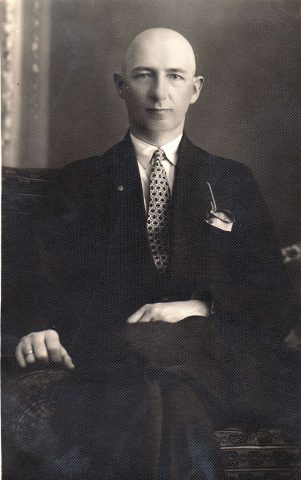 In 1960, the Panevėžys Local Lore Museum acquired an album of drawings by Valerijonas Straševičius. After his retirement in 1933, Straševičius found a new passion – he drew butterflies and beetles from his collection in watercolour from nature. The drawings are highly detailed and realistic, the shapes, colours and patterns are very precisely conveyed. 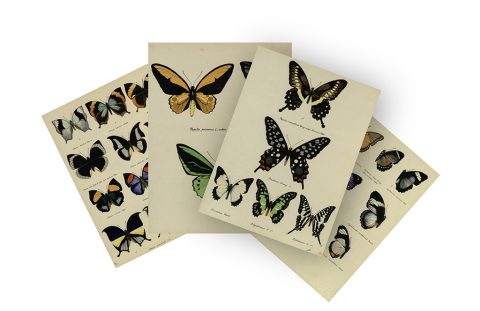 The Atlas moth (Attacus atlas) is one of the world’s largest nocturnal moths. Its wings are 30 cm long. Its habitat is mostly India and Southeast Asia. The tips of the wings of the Atlas moth resembling the head of a cobra help it to scare away predators.

The Menelaus blue morpho (Morpho menelaus) are exotic blue butterflies with 12 cm long wings that live in the tropical climate zone. They are widespread in Central and South America.

The Hercules beetle (Dynastes Hercules) is one of the world’s largest beetles. The larger part of the 17 cm long beetle is the horn. It is native to the tropical forests of Central and South America.