What do the rich, the poor, the boy and the girl have in common? The correct answer is childhood. No matter where and when a person’s first steps begin, the child’s main goal is to become a member of society by fully integrating into it. The collection of the Preili Museum of History and Applied Arts contains many testimonies of this process, as well as various toys as well as school supplies.

The only doll of archaeologist Antonija Vilcāne. Middle of the 20th century

Antonija Vilcāne, a famous researcher of the Jersika castle mound and a Latvian archaeologist from Preiļi, did not play with dolls as a child, and her older brother’s toy cars seemed to her much more interesting. In the 1960s, paper dolls were very popular in Latvian schools and also A. Vilcāne loved to draw new dresses, repaint etc. The dolls desired by all the girls – “Aina” and “Baiba” – very expensive and only few could afford them. On her 16th birthday A. Vilcāne asked for a present – a doll. This first doll was very much loved and decorated as much as she could, for example, with homemade beads from apple seeds, or by borrowing a brooch shining in the dark from her mother. When Antonija went to secondary school in Preili and later to the University in Riga, the doll stayed on the bookshelf at home. Later it was donated to the Preili Museum of History and Applied Arts. 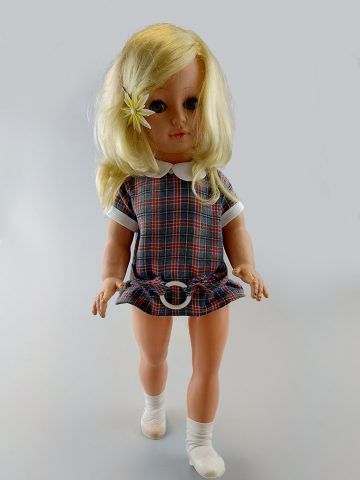 It was through the alphabet book that the children became acquainted with the language, learned how it works, how sounds turn into letters, then into words – creating a beautiful and flowing language. To make learning easier, the learning material was supplemented with pictures of the words to be taught, most of which were common nouns that the child had already become acquainted with, but at the end of the alphabet book there were some easy-to-read pieces to reinforce the knowledge. The collection of the Preiļi Museum contains an alphabet book published in the Latgalian language in the 1937, from which the famous Latvian film director Jānis Streičs born in 1936 in Preili parish learned to read. 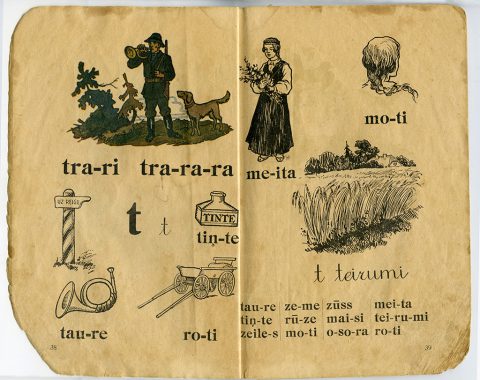 At the beginning of the 20th century non-governmental and civic education associations, clubs and organizations for children and young people began to form in all countries of the world. The scout and girl guides movements are more widely known, but local analogues were founded in many countries around the world. The author of the idea of ​​Latvian Mazpulks organisation is Latvian politician and head of an authoritarian regime from 1934 Kārlis Ulmanis, and he borrowed the idea from rural youth organizations in the USA. The beginning of the Mazpulks organisation is considered to be the year 1929, when the word “Mazpulks” is mentioned for the first time in writing, using the model, the main core values – Heart, Head, Health, Hands, and even visual representation in the form of a four-leaf clover leaf ​​of the American youth organisation “4H”. The aim of the organization was to promote the faster integration of young people into society by teaching them a variety of practical skills: housekeeping, crafts, technologies, creating and cultivating experimental fields, cultivating physical and artistic activities. Thus, by cultivating the idea of ​​working in agriculture and household, growing various plants and animals, seeing achievements and material benefits, a person grows, develops and becomes strong in body and spirit. 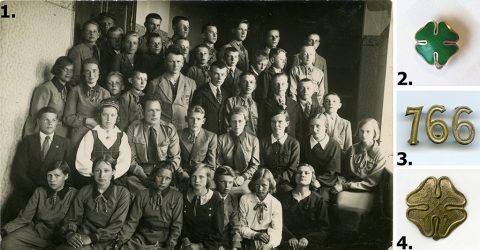 The collections of the Grodno State Museum of the History of Religion contain many items that were used for children or were meant for them. These are clothes, books, paintings, and toys. Some of them are presented in this virtual exhibition.

For centuries, the christening gown was the first item of clothing for babies in Christian countries. Usually, it was a long and wide shirt, the cutout of which made it easy to put on and take it off, and at the same time it enabled to open the hands and feet of the child for chrismation during the ritual. Most christening gowns were of white color, which symbolized the spiritual purity of the newborn. It was believed that during his baptism, Jesus Christ was also dressed in a white straight gown. In later times, christening gowns were decorated in a special way to emphasize the importance and solemnity of baptism.

Among the aristocracy and wealthy townspeople, christening gowns were kept throughout a person’s life as a family heirloom. But in poor families, due to the relatively high cost, these items still passed from older children to younger ones. Usually, the christening gown was not worn, but in case of illness, when other known means did not help, the child was often dressed in it, thereby emphasizing that his life was in the hands of God. If the baby died, which happened, unfortunately, quite often in those days, the christening gown became a funeral garment for it.

The presented item, which was used in urban environment and was quite typical for that time, is richly decorated with “English sewing”, a special technique that combines features of white thread embroidery, cutwork and needle lace. Despite the name, this technique appeared in the Czech Republic and was used for a long time in the countries of Eastern Europe. However, in the 1840s, it became fashionable and so popular in England that it was perceived as part of British culture in Western Europe and America. This is quite ironic, considering that the original traditions of embroidery on the island of Britain have more than a thousand years of history. The first artifact of English embroidery is considered to be the mantle of St. Hubert, found in his tomb in 909. By the way, St. Hubert is the patron saint of Grodno. 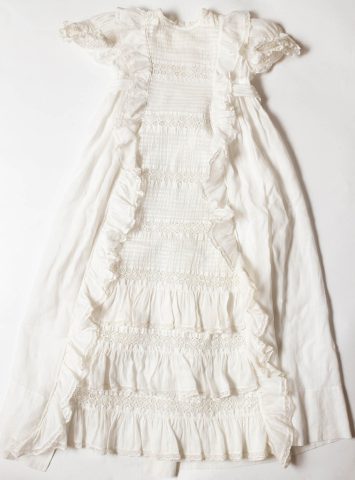 Children’s fashion as a phenomenon appeared quite late: not earlier than the second half of the 18th century. It is believed that the ideological basis for understanding that children are not just a miniature copy of adults was the work of Jean-Jacques Rousseau “Emile, or On Education” (1762). Until that time, elements of children’s costume, as a rule, were copied by adult samples, and different only in size. However, even later, various garments for children were made considering modern trends and preferences. The presented bonnet is the proof of this fact. Such items became a part of women’s costume since the beginning of the 19th century. From time to time they went out of fashion, then they regained relevance again. However, in the costume of infants from wealthy families, they were presented for almost the entire century, mainly due to the successful combination of functionality and aesthetics. 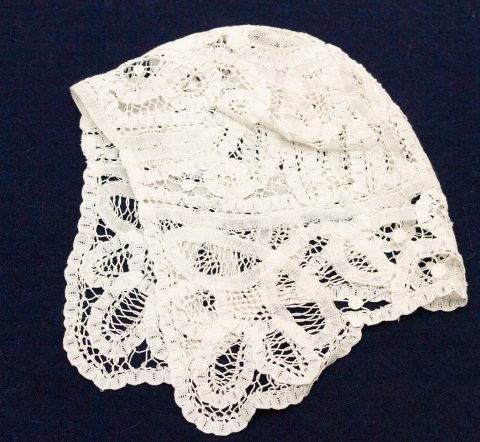 Rattles are the oldest toys in the world. Although the exact time of the appearance of the rattles is unknown, it is obvious that they originally had a ritual function and were used by shamans in the rites of primitive magic. The first children’s rattles, which primarily had the function of a talisman, were boxes with plant seeds. However, rattles created by human hands began to appear gradually. The most ancient of them were found in Egypt and dated back to the 4th millennium BC. Baby rattles were used in ancient Greece and Rome and were made from wood or ceramics.

Silver rattles appeared in Europe no later than the 16th century. Most often these were rings or whistles with bells, as well as hollow spheres with balls inside. By the 19th century, rattles were decorated with precious stones, corals, and mother-of-pearl. Usually toys were hung around the child’s neck and attached to his arm. The presented item has an ivory tip at one end, which was supposed to relieve teething pain. There is a whistle at the other end of the toy. These rattles became a favorite christening gift. The popularity of silver rattles could be also explained by well-known qualities of this metal, which people then could not yet explain from a scientific point of view. The silver helped healing of small wounds and did not cause ulcers in the baby’s mouth when he tasted the rattle. Interestingly, in the already mentioned book “Emile” Rousseau criticizes the use of richly decorated rattles made of silver or gold, considering it an unnecessary luxury.

There are quite a few images of babies from various dynasties of monarchs who were depicted with similar rattles. Even in the ruling surnames there was a tradition to pass on rattles from generation to generation. Some of these items were actually in use for over a hundred years. For example, a photograph of the heir to the Russian imperial throne, Nikolai Alexandrovich, the future emperor Nicholas II, is well known, where he is depicted with a rattle created in the 1740s for the young Russian emperor John Antonovich. 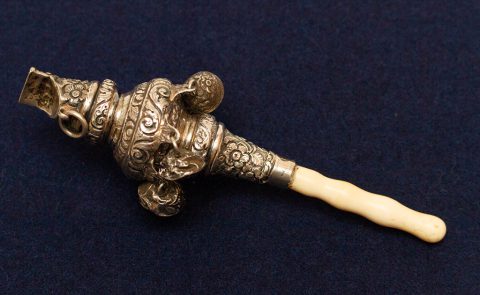 We remember the impressions or feelings, that most affected our imagination as a child, all our lives. We do not experience them every day.  They are usually aroused by associations – a familiar smell, a stuck melody, a favorite toy or a book that has been flipped through and read many times. Photographs can also help to evoke memories. Over time, they gain value not only for those captured in photographs, but also for people who do not know them at all, trying to read and understand the signs of the past, learn more about the culture, customs, traditions and fashions of the past.

From the collections of the Panevėžys Local Lore Museum we have selected for this exhibition a book, a toy – a rocking horse, as well as a photograph of a boy sitting on a similar horse and a photograph illustrating the extinct traditions of the epochs and the purpose of the device on display at the museum.

Stasys Eidrigevičius is a graphic artist, painter, poster artist, illustrator, creator of installations and happenings, came from Panevėžys region. This is not the first illustrated children’s book of this artist.

In 1978 he painted gouache illustrations for Vytautė Žilinskaitė’s short story “Robot and the Butterfly”, and later illustrated another 40 children’s books for Lithuanian, Polish, French and Japanese publishers.

Eidrigevičius not only created illustrations for this book, but also wrote poems.

In the artist’s drawings, childhood is not an idyll, it is a time when subconscious fears and desires mature, which chase the person for a lifetime. In 1973 S. Eidrigevičius graduated from the LSSR National Institute of Arts (now the Vilnius Academy of Arts), since 1980 he lives and works in Warsaw.

In 2001 he was awarded the Lithuanian National Culture and Art Prize; his work also was awarded 35 important international awards.

Works of this artist can be found in Lithuanian and Polish museums, in the British Museum in London, in the Museum of Modern Art in New York, in the National Library in Washington, in the Vatican Museum, in the Tokyo Art Gallery, and in private collections in Lithuania and abroad.

Currently in Panevėžys the Stasys Eidrigevičius Arts Center (SEMC) is being built , and the artist’s collection is being formed. It is planned that SEMC will be opened for visitors in 2023.

This rocking horse was probably used as the prop to photograph the boy – photographers had various toys to interest and make the portrayed children calm.

In same period, in the studio of photographer Jonas Cibulskis in Panevėžys, there was even a stuffed wolf, which made a great impression for children. 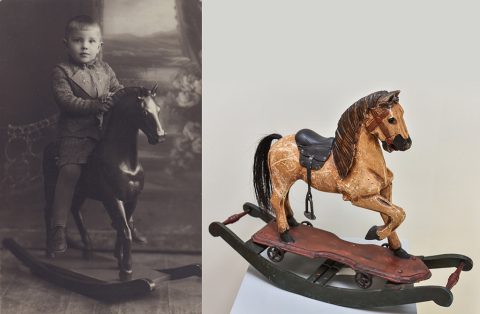 The photo shows not only the device created by V. Firinauskas himself to help his son stand, but also the tradition to dress up boys in dresses due to practical reasons that still existed in the interwar period. 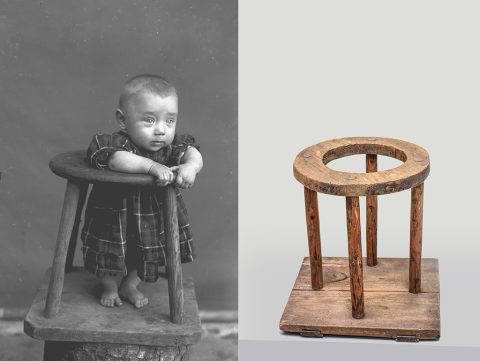