The course of time and seasons has been constant for millions of years, determined by the cyclical movement of the Earth around the Sun, but time tracking tools have evolved continuously, from relatively simple observations of natural cycles to technically complex time recording tools. In history there had been different approaches – about the beginning of a new year, the exact number of days and months in a year, all these changes are recorded in calendars – Julian or Gregorian style. During the time not only the content and format of calendars, but the whole way of obtaining information has changed.

For a long time, calendars were created in the form of a periodical yearbook. Here, the list of days was only a small part of the calendar, main part was other information of various kinds. For example, the oldest calendar in the collection of the Preili Museum – the Vilnius Calendar for 1905 (which belonged to Izidor Lauskis (1861-1924), a farmer from Varkava parish near Preili) consists of 7 thematic blocks dedicated to different topics: church and religion, world and Russian empire rulers, technological progress, geography and medicine, as well as the most interesting objects of Vilnius city and its history. There are also thematic articles by individual authors. The 180 pages of the yearbook contained a wide range of information that was useful to its reader even after the end of the current year. Therefore, very often entries and personal notes were made in calendars, noting an useful information also for later reading.

Fifty years later, the Kolkhoznik Calendar for 1956, although specialized for a more specific target group – kolkhozniks of Soviet Latvia, continues the yearbook format, where the monthly calendar is supplemented with tips for monthly work, practical advices on crop, livestock, horticulture and housekeeping. Most of the 336-page edition consists of articles by various authors and propagandists on the growth and superiority of the Soviet economy, “success stories” of Soviet farms, and descriptions of the udarniks. Despite the propaganda, this edition also contains a lot of comments and content comments left by its user. 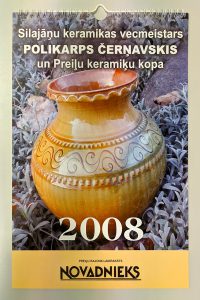 Although yearbooks and even a whole series of them continue to be published today, they have given a way to table and wall calendars, which are published in the greatest variety. Due to the change of format, there are no literary and descriptive sections in wall and table calendars, giving preference to visual material. Such a calendar format requires thematic specificity by devoting it to one topic throughout the 12 calendar months, a kind of annual TOP-12. For example, the wall calendar of the Preiļi district newspaper “Novadnieks” for 2008 is dedicated to the traditional Preiļi ceramics – masters and their works. Throughout the year, the user of the calendar could learn more about the old master of ceramics Polikarps Čerņavskis (1923-1997), Jāzeps Caics, Vladimirs Ivanovs and other ceramics of the Preiļi group. The calendar was issued to commemorate the 85th anniversary of P. Čerņavskis.

The collection of calendars of the Grodno State Museum of the History of Religion has more than 1500 items. They cover the time period from the second half of the 19th century up to this day. Calendars are grouped thematically: agricultural, holiday, and confessional. They are also different in format: there are wall, flip and pocket calendars. There are also menaion icons in the collection of the museum. They can also be called a kind of calendars, because they depict saints who are mentioned in a certain month.

“Belarusian Calendar” was published by the publishing house “Nasha Niva” in Vilnius, which was part of the Russian Empire at that time. In 1906-1915, this publishing house also published a newspaper of the same name, the largest Belarusian printed publication of that time. The calendar is interesting because it is printed in the Belarusian language in the Latin script, or “Latsinka”. Before World War II, “Latsinka” was widely used mainly by Catholic Belarusians, while Orthodox Belarusians preferred the Cyrillic script.

“The German Folk Calendar” / “Yearbook of Everything Useful and Entertaining” was published in Germany as a calendar for 1842. It contains extensive educational information relevant to the mid-19th century, as well as a large number of illustrations. It is known that this calendar was used by the monks of the Franciscan order, which had a monastery in Grodno with a rich library. Many of the Franciscans were well-educated personalities and were actively interested in world events. The calendar got into the museum collection thanks to the Franciscan father Józef Makarchyk, who handed it over in 2013.

The Menaion icon is a special type of icons containing images of saints worshiped in a particular month. Twelve monthly Menaion icons could be combined in the form of miniatures in the “Annual Menaion”. The surface of 44.4 x 37.5 cm icon shown on the photo, painted on a plank, is divided into five horizontal rows, in which there are images of holidays and saints. They are following each other in accordance with the church calendar from July 1st to July 31st. The icon was created in the second half of the 19th century. Such icons were widespread among the Orthodox population throughout the Russian Empire.

The first calendar in Lithuanian language was prepared in 1845 by an educator Laurynas Ivinskis and it was named „Metu skajtlus ukiniszkas ant metų Wieszpaties 1846“. It was published by Adam Zavadskis printing house in Vilnius. The calendars of the first seven years were published by L. Ivinskis himself or with the funds collected by him. Lithuanian calendars were being published until the press was banned in 1864. In the period of 1866–1867 L. Ivinskis had to rewrite the calendar in Russian letters. In 1878 was issued in Latin letters but without Polish badges. In total were issued 22 calendars – 19 in Latin letters and 3 in Cyrillic. Since 1918, calendars have been published in many cities of Lithuania, their types have increased, their topics have expanded, and the number of publishers has increased.

The first Panevėžys calendar for 1914 years was prepared and published in 1913 by the book-hawker Juozas Masiulis book store in Panevėžys. It was printed by Martynas Kukta printing house in Vilnius. The calendar provides geographical and historical knowledge about Panevėžys, discussion about urban issues of education, the societies operating at the time are presented, works of literature and journalism were printed, advertisements of Panevėžys district business enterprises. The publication is kept in Panevėžys County Gabrielė Petkevičaitė-Bitė Public Library, published in the Panevėžys Digital History Library: http://www.paneveziomuziejus.lt/lt/senieji-leidiniai

They were printed on canvas. In the design the city, national motives are reflected, current events of those days, were gifted as souvenirs or business gifts.