Notable Latvian artist Jāzeps Pīgoznis (1934-2014) was born in Sidrabiņi village of Odumanu village, Ružina parish, Rēzekne district. He received his art at the Painting Department of The Art Academy of Latvia. He has worked in the fields of painting, graphics, book illustrations and medals. Jāzeps Pīgoznis has been an active participant in art plein airs, and since 1998 he has also participated in Preiļi art plein airs. The artist has donated five of his works to the art collection of the Preili Museum of History and Applied Arts. After the artist’s death, the family decided to donate Jāzeps Pīgoznis personal belongings, archive materials and separate works of art to the Preili Museum. Then was born the idea of establishing the Jāzeps Pīgoznis Award in Latvian Landscape Painting..

Landscape occupies a very important place in the painting of Jāzeps Pīgoznis. Throughout his life as a painter, he himself has never stopped painting landscapes – Latvian forests and sea, Latgale hills and lakes, views of Riga and small towns. A poetry of the Latvian seasons is especially alive in his paintings.2. Kolkhoznik Calendar. 1956

In graphics, Jāzeps Pīgoznis’ greatest contribution and popularity is related to the creation of illustrations for books. The books illustrated by J. Pīgoznis gave him a lot of recognition in book graphics exhibitions and international competitions. Most of the illustrated books are in children’s literature, so it can be said that whole generations have grown up with his sincere and benevolent illustrations.

In honour of the memory of J. Pīgoznis and appreciating his contribution to Latvian landscape painting, in 2015 the Preiļi County Council and the Riga City Council established the Jāzeps Pīgoznis Award in Latvian Landscape Painting. The aim of the award is to further develop and popularize Latvian landscape painting. Every year, the winner of the prize competition receives a medal created by the sculptor Jānis Strupulis. In the centre of the obverse is a walking figure of Jāzeps Pīgoznis – the figure is taken from J. Pīgoznis’ self-portrait. On the reverse “A Swimmer” – a fragment from the other illustration of J. Pīgoznis.

Grodno is a well-known center of fine arts. Such famous artists as Leon Bakst or Osip Lubich were born in it. The painting tradition was developing here over the centuries. Perhaps the earliest work, which was created in Grodno and the author of which is known, was the “Holy Family” by Gilyariy Khoetsky, a monk of the Catholic Dominican order. The painting is kept in the Grodno State Museum of the History of Religion. 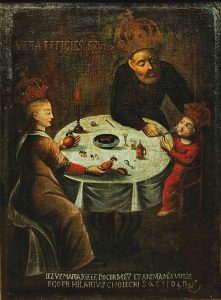 The piece of art is painted in oil on canvas 76.5×55 cm in size. The painting depicts the Holy Family – the Virgin Mary and her husband Joseph. According to Christian ideas, this is the family in which Jesus Christ was born. Khoetsky’s composition represents the Holy Family at dinner, but the ordinary subject of the painting hides a deep symbolism of the piece of art. Thus, there is a lamb in a platter in the center of the table. It symbolizes the sacrificial death of Jesus Christ. The fruits on the table are associated with death and resurrection in the sequence of four seasons. The information about the author is indicated at the bottom of the work:

Jesus, Mary, Joseph, I give you my heart and my soul

I am brother Gilyary Khoetsky of the holy order of preachers

Khoetsky’s painting is a pictorial interpretation of the “Prayer Before Meal” (“Le bénédicité”, also “La Sainte Famille á table”, 1628) by the famous French draftsman and engraver Jacques Callot (1592-1635 ). There is a popular opinion among Grodno residents that the work was painted in the 1630s. for the Church of the Annunciation of the Blessed Virgin Mary at the monastery of St. Brigitte of Sweden, which is considered today one of the six patron saints of Europe. This monastery was founded in 1634 with the support of Christopher Veselovsky, marshal of the Lithuanian court and administrator of Grodno husbandry. The construction of the monastery complex as a whole was completed by the 1640s, the church was consecrated in 1651. The Dominicans themselves, to whom Khoetsky belonged, settled in Grodno a little earlier, in 1632, at the invitation of the head of Grodno Fryderyk Sapega. A rather unusual argument used by adherents of this version of the painting origin is the similarity of St. Joseph from the work by Khoetsky and Christopher Veselovsky, whose portrait was found after the Second World War in the same monastery of St. Brigit in Grodno. However, there is another version of the dating of the piece of art, according to which the painting belongs to the end of the 17th century. Its supporters point to the closeness of Khoetsky’s painting to the Studzyanska Icon of the Mother of God, also created on the basis of Kallot mederite in the 1630s. In 1671 the Studzyanska icon was recognized as miraculous and by 1684 it was considered one of the 12 most revered in the Polish-Lithuanian Commonwealth. King Jan III Sobieski also made a pilgrimage to the Studzyanska Icon. This version is also supported by the Latin inscription VERA EFFIGIES STVD (“a genuine image of the Stud. [zyanska icon]”). Although, this does not exclude the possibility of a later addition of the inscription due to the increase of veneration of this image. It is interesting that the court painter of Jan III Sobieski was Claude Callot, Jacques’ nephew. Claude Callot, among other things, actively developed religious painting subjects based on the masterpieces of his uncle, and largely determined the pictorial preferences of the nobility of the Polish-Lithuanian Commonwealth of the late 17th century. An indirect confirmation of the later time of the creation of the painting is the fact that Khoetsky died between 1705 and 1709.

The “Holy Family” remains an adornment of the exposition of the Grodno State Museum of the History of Religion and invariably attracts the attention of visitors.

Panevėžys professional art was formed on foundations laid by famous artists of this region in the first half of the 20th century. Among them was Juozas Zikaras (1881–1944) – the first professional and one of the most famous Lithuanian sculptors, who created many works that became the symbols of independent Lithuania: sculptures “Freedom”, “Bookbinder”, portrait busts and reliefs of state and public figures, sculpture interiors and exteriors, medals. J. Zikaras is the author of all litas and cent coin models issued in interwar Lithuania. The rich creative legacy of the artist is preserved in Lithuanian museums (also in Panevėžys Local Lore Museum), libraries, churches. To commemorate the 140th anniversary of the sculptor’s birth, the Parliament of the Republic of Lithuania declared 2021 the year of the sculptor Juozas Zikaras.

Zikaras was born in18 of November, 1881 in Panevėžys district, Paliukai village, Pumpėnai county. In 1916 graduated from the Faculty of Sculpture of the St. Petersburg Academy of Arts. In 1918 returned to Lithuania with his family. The most important lithuanian nation freedom ideas embodying works by J. Zikaras were born in restored independence Lithuania. J. Zikaras was a great educator who has raised more than one generation of artists. During 1919–1928, he worked as a teacher of the Panevėžys State Gymnasium, Teachers’ Seminary. In 1928 arrived in Kaunas by the invitation of the Minister of Education, taught at Kaunas School of Art, during 1944 he was given the title of professor. Broken by Soviet security persecutions and interrogations, J. Zikaras died tragically in 10th of November, 1944, buried in Kaunas Petrašiūnai cemetery.

Zikaras created the sculpture, which became the most prominent symbol of the Lithuanian nation, while living in Panevėžys in 1921. On 14 of May, 1928 to mark the tenth anniversary of independent Lithuania, the sculpture was unveiled in the temporary capital of Lithuania – Kaunas, in the courtyard of the War Museum. During the Soviet era, the monument was demolished, 1989 restored in the same place. In 2021, the monument “Freedom” will be one hundred years.

In 1931 Bank of Lithuania built in Panevėžys (architect Mykolas Songaila) – one of the most beautiful and important modernist style buildings in the city. J. Zikaras created 12 decorative sculptures “Atlants” especially for the interior of this building, a rosette in the operating room and ornamental decoration with Vytis in the facade of the building.